Churches and chapels serving as landmarks in the villages, bearing witness to the past, home to artistic treasures and amazing organs.

The Notre-Dame parish church was built on the foundations of a large 13th century Romanesque chapel erected by the Lords of Marbais.

The nave collapsed in 1923 and was rebuilt in 1925 in a Neo-Romanesque style.

The parish owns a statue of the Virgin Mary to whom various miracles have been attributed after she had been invoked to cure hernias. Hence her name, Notre-Dame-Alerne, that comes from 'a l'herne' - hernia in old French.

The oak benches, the confessionals, the pulpit and the altar had already been described around 1860. The church also boasts an organ and remarkable acoustics.

This chapel was built in 1774 by J.A. Leurquin in memory of his mother who died during childbirth. The young girls used to hang a clog to ask Our Lady of the Graces to bless their new love.

Built on a mount planted with Scotch pines, the first castle’s chapel is thought to date back to the 16th century. Opinions diverge, but it was probably devoted to Our Lady or Saint Antoine (hermit).

This gothic chapel was erected with bricks and is supported by a base made with regional stones. More info on the website (in French) Le Patrimoine Stéphanois 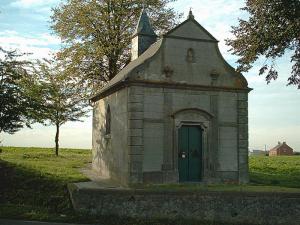 This chapel was actually attached to the 'Jouerie farm' in Marbais. It is situated on the Chaussée de Nivelles and is dedicated to Our Lady of the Afflicted and bears an invocation dating back to 1750.